I will start a story of an extraordinary Yacht with a story about a car. A car of dreams, and one that was never made.

On one occasion Lee Iacocca and the guys from Detroit visited Enzo Ferrari. Lee, the leading manager of automotive industry of the time, planned a collaboration with Enzo, the leading designer, to make a supercar. Enzo refused them, saying that he as the author can not function as a wheel in such a large system. His rights as an author and his freedom would be limited. In such a system, it is not possible to make such a car, Enzo argued

Back in Detroit, Lee Iacocca gave a task to his engineers to create a feasibility study to see how much it would cost Ford to overthrow Ferrari from the throne of the world’s oldest active sports car race in endurance racing, 24 Hours of Le Mans.

By doing this Lee turned another page in history. After six years of Ferrari in a row, in 1966 Ford climbed onto the throne. The legendary model GT40. Then again in 1967, 1968 and 1969. Nearly half a century later, Ferrari is still unable to return to that throne.

We can only guess how that supercar would look if they managed to combine their skills.

But unlike this story from the asphalt, the ocean one has a different outcome.

1992 was a big anniversary. 500 years since Christopher Columbus sailed to America. The world’s largest shipyard of leisure boats, the French Beneteau, has under the brand CNB Construction Navale Bordeaux just entered the superyacht segment with two models of sailboats, with hull lengths of 70 and 77 feet. In the years to come they will be building yachts up to 200 feet in length.

At that time, the leading architect of boats in the race around the world, which today has the name Volvo Ocean Race, and then the Whitbread Round the World Race, was a New Zealander Bruce Farr. Farr has remained the leading architect of yachts for that race until this day. The largest and the biggest have agreed to design, for that special anniversary, a special series of ships.

The story goes a step further. The largest shipyard and the leading architect were joined on the project by a famous design studio, the Italian Pininfarina. Design is a category that is difficult to measure. About their contribution to the project, designers said that they were taking care of three factors. First you have to respect the tradition, second functionality is priority in design and third it must include innovation.

The result of their work were three models of yachts. Of 45, 53 and 62 feet. The largest one was produced under two brands. Beneteau 62 and CNB 64. A total of 18 such yachts was built from 1992 to 2004.
Of these, less than half of the yachts were built with interior design as proposed by Pininfarina in two-tone combination of wood, with mahogany and Finnish birch, which offers a bright and warm atmosphere. 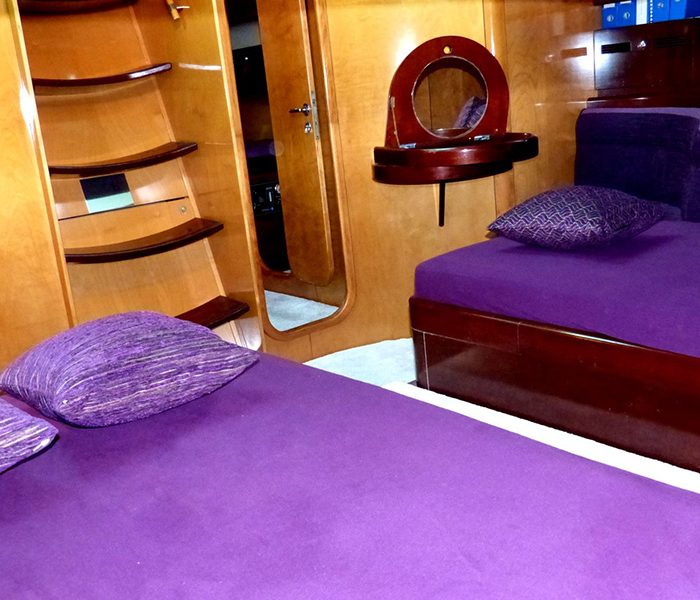 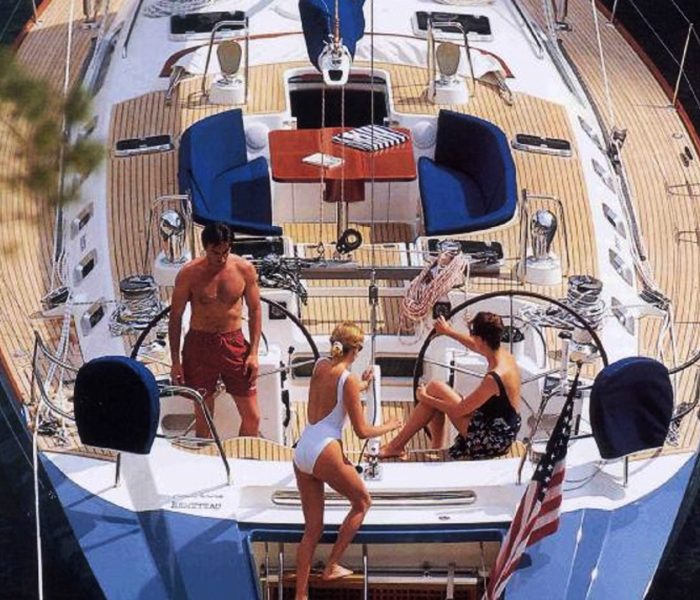 It was a time when businessmen were known to sail in this demanding race around the world. On his yacht in 1985/86 Simon Le Bon circumnavigated the world in this race.

Later on, the race went the other way. Vessels were ascetic, and businessmen have been replaced by professional athletes.

Bogey 1 is one of the 16 yachts built in this construction enterprise. Today, with its characteristics it is a cross-section of a luxury super yahte, racing yacht and artistic heritage.

Bogey 1 is a luxury super yacht. It is 18.95 meters long and 5.20 meters wide. A total of 40 gross tons. Three guest cabins, and each cabin with its own toilet and bathroom. The crew has a separate cabin with toilet and bathroom. The kitchen is a separate room. When I say kitchen, I mean a professional kitchen. The yacht is not only equipped with equipment that is used only for luxury, such as for example the icemaker or the air conditioning systems. It is also equipped with systems that allow it to start sailing right away and sail across the ocean. So there are systems for desalination of sea water, generators, inverters, radar, systems for communication and navigation in the most demanding conditions, as well as equipment for rescue and survival. Such a large space and equipment of the ship, have no other function than to open up possibilities.

Bogey 1 is a sports boat. If we exclude the ascetic strictly competitive sailing boats, which provide no comfort to the crew, Bogey 1 is faster than all other yachts with sails that you will be able to see on your horizon. Regardless of Bogey 1 being filled with luxury, she has a real athlete’s heart. The deck is designed to have a space with a table that can sit up to ten people, and which is completely separate from the deck sections that require sports engagement. There are no ropes or winches here. Only space for enjoyment. And in order to achieve the highest possible level of sailing experience, special tri-radial racing sails were made for Bogey 1 of laminate with Pentex fibers. It is a special feeling when large gennaker and spinnaker sails open up.

Regardless of Bogey 1 being filled with luxury, she has a real athlete's heart

She is an artistic heritage. Whether we are on deck or below deck we have the impression of a timeless uncluttered design.

Bogey 1 is an artistic heritage. Whether we are on deck or below deck we have the impression of a timeless uncluttered design. This heritage requires a careful attitude and continuous investments in maintenance. Living quarters are made of two-tone quality wood, mahogany and Finnish birch, which offers a bright ambience and warm atmosphere. At a time when the yacht was built, twenty years ago, the list price of the basic version, without taxes was 650 thousand pounds. If yachts of these dimensions would be built today in that standard, their price would exceed two million euros.

Bogey 1 is a yacht of exceptional beauty, great features and a high level of security. 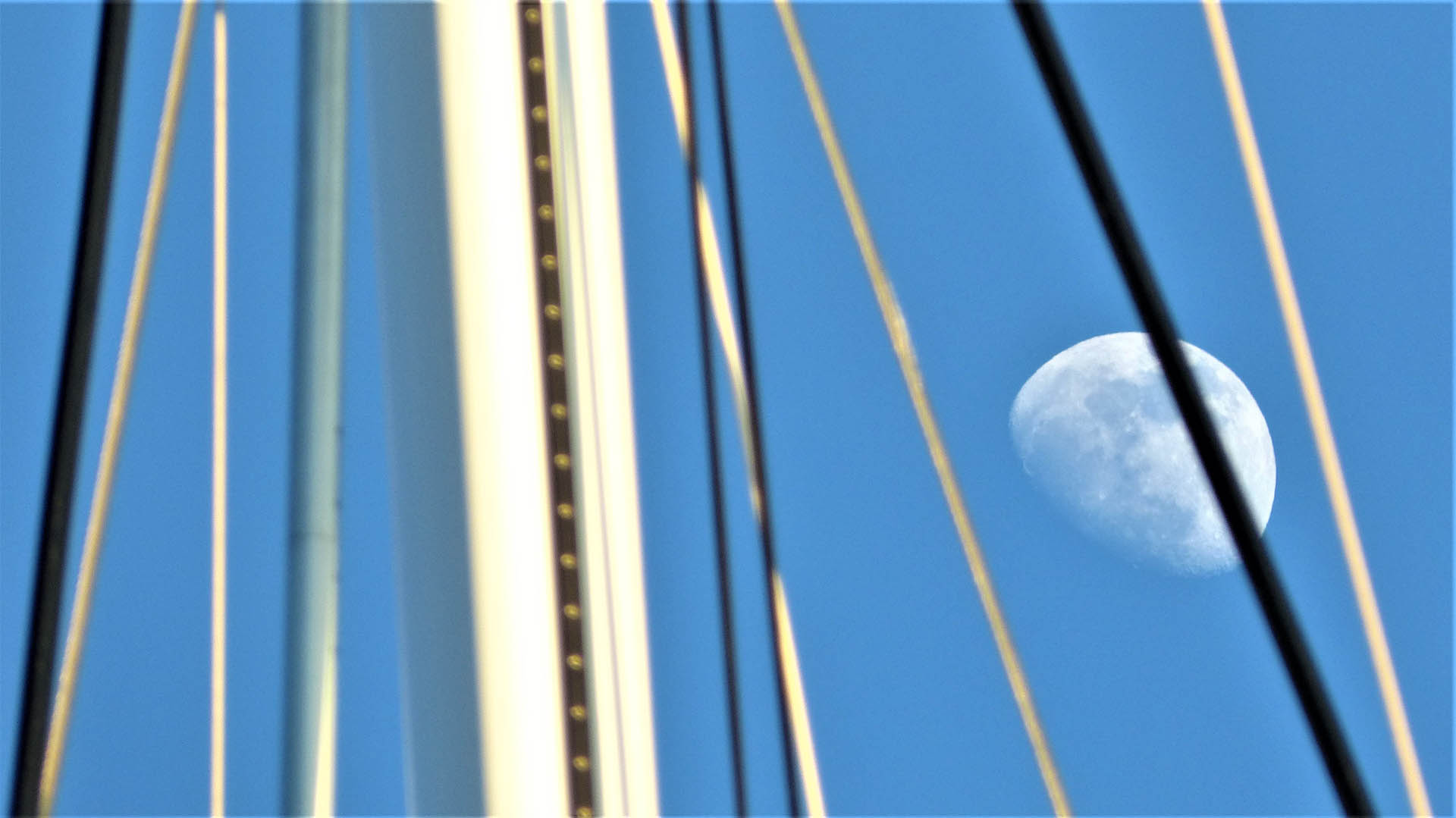 Go Around the World by Returning to the Old Place

Go around the world by returning to the old place. 2019 is a year of great anniversaries. Fifty years since man first landed on the Moon and five hundred years since the beginning of Magellan’s sail around the world. These two anniversaries are the motive for our project in which we gather luxurious yachts that will...Read More
mislavBlog, Sailing

Avoid stressful situations, avoid crowds at airports, crowded marinas, sea accidents, hours, and hours of waiting in queues for fueling. You are going sailing, relax, rest, enjoy the peace and quiet, enjoy the sea and the wind, with a glass of wine, spend the night in untouched nature, only the milky way above you, visit...Read More
mislavBlog, Sailing

The newest yachts are generally of worse quality than older yachts. When guests acquire for a yacht they often want the yacht to be as new as possible. Typical requirements are that they do not want a yacht older than 7 years, and there are more and more demands and that the yacht should not...Read More
mislavBlog, Sailing 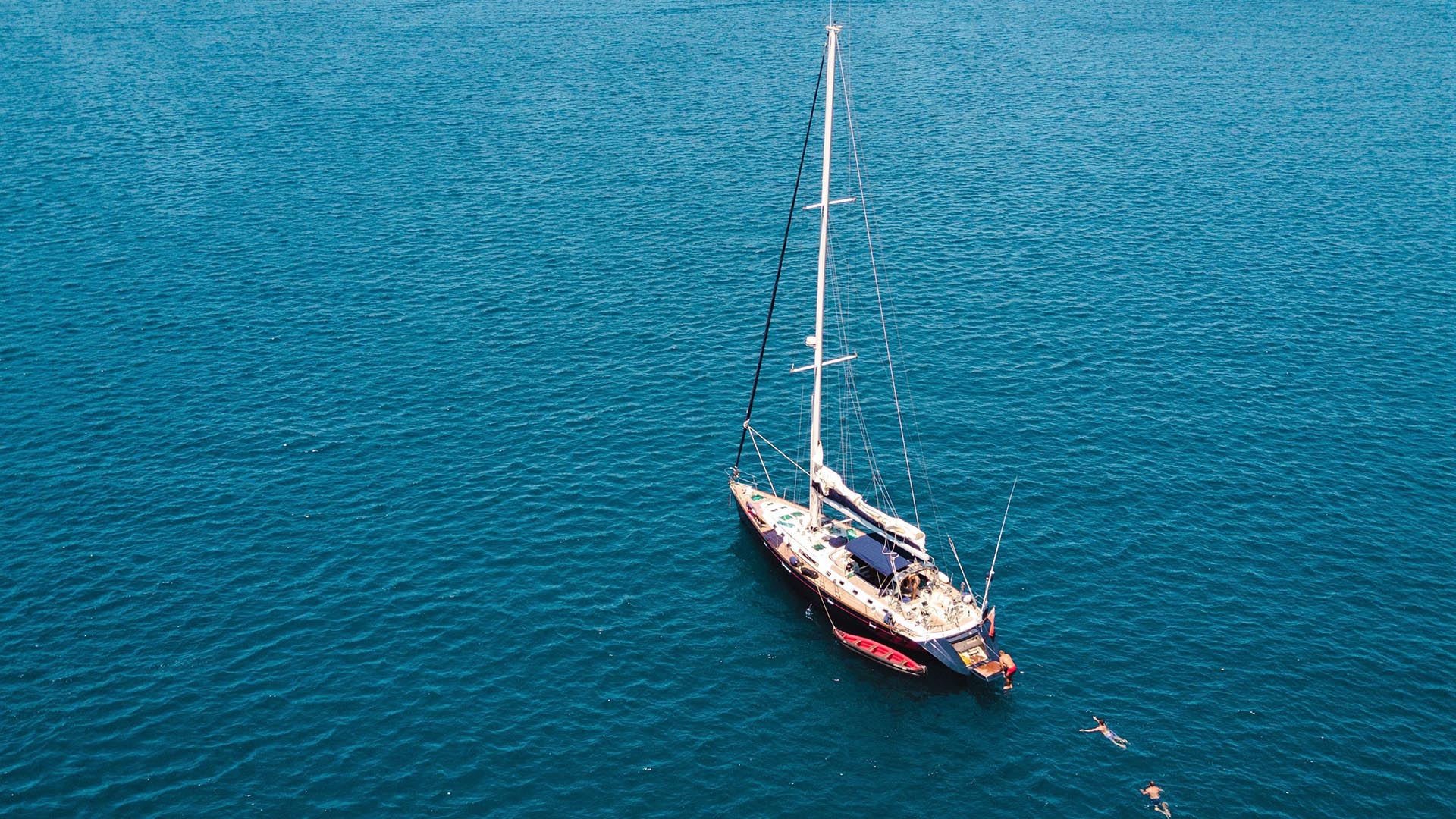 Yacht with a permanent crew, skipper and hostess

Yacht with crew, skipper and hostess Don’t waste your time, Yacht with crew, skipper and hostess, Avoid the risks of losing thousands of euros of deposit Avoid unnecessary waiting and losing time Instead, sail and enjoy more Avoid the risk of deposit of 2,500 € to 5,000 € When chartering yachts, a deposit is required...Read More
mislavBlog, Sailing

Sailing is fun, but sailing is also a sport and it is a special feeling when you are sailing on a yacht that is more powerful than other yachts in your local waters. Bogey 1 is a luxury sport sailing yacht that actively participates in regattas. How fast Bogey is best evidenced by the results...Read More
mislavBlog, Sailing

Bogey 1, a story of an extraordinary Yacht

Bogey 1 yacht is a luxury super yacht. Bogey 1 yacht is an artistic heritage. Whether we are on deck or below deck we have the impression of a timeless uncluttered design. Bogey 1 I will start a story of an extraordinary Yacht, Bogey 1, with a story about a car. A car of dreams,...Read More
mislavBlog, Sailing